‘A painful and poetic inside view of clinical depression’

‘Weirdly, the psychological cage this play explores allows theatre-makers an unprecedented degree of freedom. Shorn of stage directions, no characters are identified, and even the number of performers remains open. Illumi-Nation’s production uses five actors. One (Pearce Hessling) embodies the medical establishment as a stable and unitary force; four others (Laila Thaker, Catherine Holder, Stephanie Pick, Andy Aisbett) inhabit the “bewildered fragments” of the depressive’s disintegrating mind. A moody minimalist soundscape (Matt Brown) and dynamic physical theatre push deep into layers of anguish and despair…the bafflement, the unquantifiable suffering of a mind in extremis come through loud and clear, and vexed questions about the subjective experience of mental illness, and its treatment, will haunt you afterwards.’

4.48 Psychosis is a last play written by British playwright Sarah Kane. First staged in London in 2000, eighteen months after Kane’s death from suicide, according to Kane’s friend and fellow-playwright David Greig, the title of the play derives from the time, 4.48 am when Kane, in her depressed state, often woke.

Born in Essex, Kane studied drama at Bristol University and playwriting at the University of Birmingham.She was writer-in-residence for theatre company Paines Plough and literary associate for the Bush Theatre in London. Although she  wanted to be a poet, Kane found she was unable to convey her thoughts and feelings through poetry. In her brief life she wrote 6 plays; Blasted, Skin, Cleansed, Crave, Phaedra’s Love and 4.48 Psychosis.

Kane struggled with severe depression for many years and was twice voluntarily admitted to a psychiatric hospital. She finally succumbed to her illness and died in 1999. James Macdonald, director and close friend of Sarah Kane wrote this article in 1999 which talks, not only about her work, but about Sarah; his friend.  They Never Got Her

4.48 Psychosis is composed of twenty-four sections, has no explicit characters or stage directions and therefore each interpretation is different. Director, Mish McNamara with actors; Andy Aisbett,  Pearce Hessling, Catherine Holder,  Stephanie Pick and Laila Thaker have created a postdramatic interpretation; a world where we can see what we feel and where the audience can find connections with the difficult and misunderstood world of mental illness.

Collaborator, mbryo has composed and will perform an original soundscape that echoes the character’s vulnerabilities and underpins the poetic text, full of energy and wit. With an evocative lighting design by Jason Bovaird (Moving Light Productions) the work reveals an inner world of raw emotion shaping Kane’s ‘bewildered fragments’ into a night of startlingly beautiful theatre.

4.48 Psychosis was staged at Gasworks Theatre from 12 – 16 September as part of Melbourne Fringe Festival.

‘See our gallery  for images of this production. 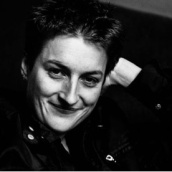